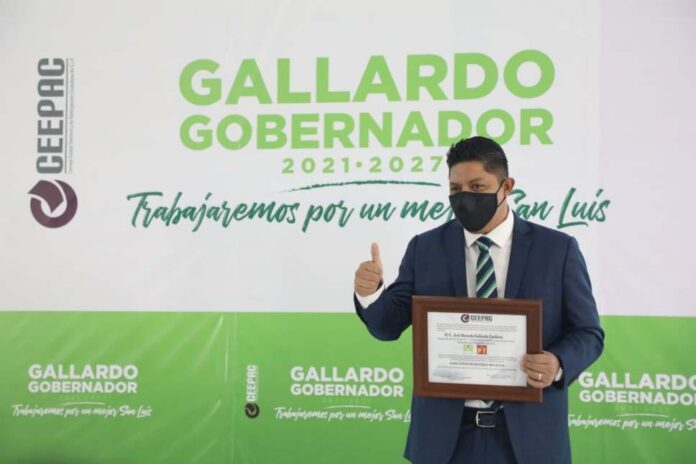 Ricardo Gallardo Cardona protested as governor of San Luis Potosí, a position he will occupy from September 26, 2021, until September 2027, in succession to Juan Manuel Carreras.

With the perimeter secured by dozens of state police agents, state Public Security and private security, the member of the Green Ecologist Party of Mexico (PVEM) entered 12:25 hours through the main median of Plaza de Los Fundadores to take the stage of the symbolic act.

“I protest to keep and keep the political constitution of the Mexican United States and that of our State; I promise to carry out the office of this state with loyalty and patriotism, and if I do not do so, that the people will demand it of me,” said the new governor.

Who is Ricardo Gallardo?
José Ricardo Gallardo Cardona has a degree in Law from the Universidad del Centro de México and is 40 years old. He is the son of the former municipal president, Ricardo Gallardo Juárez. He headed the municipal government of Soledad de Graciano Sánchez from 2012 to 2015, for which he obtained the National Award for Municipal Development and was a federal representative for the same town in the LXIV legislature.

During the session, he was accompanied by the president of the Senate, Olga Sánchez Cordero; the national leader of the Labor Party, Alberto Anaya; the Moreno deputy Gerardo Fernández Noroña; the current coordinator of the green party in the Senate, Manuel Velasco; and from Morena; Ricardo Monreal.