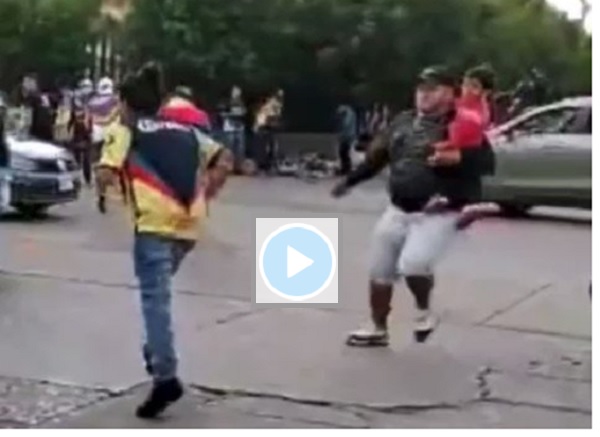 A San Luis Potosi man with a child in his arms knocked down one of the fans of the América soccer club, after the Liga MX match in the state capital.

A fan of Atlético de San Luis went viral on social networks after a video was released in which he is seen carrying a child in his arms and participating in a fight against fans of Club América, after the match that the Mexico City team won 1-0 at the Alfonso Stadium Lastras Ramírez on Sunday, October 17th.

Videos show San Luis and América fans exchanging offensive shouts, throwing objects, and damaging a motorcycle on public roads, and when the group of America “hooligans” ran away, a man in a black hoodie and cap, with the child in his arms, somehow manages to knock down one of the opponents and suddenly a horde of Potosinos start pounding on the Americanista leaving him unconscious on the floor.

Here is the footage, viewers’ discretion is advised