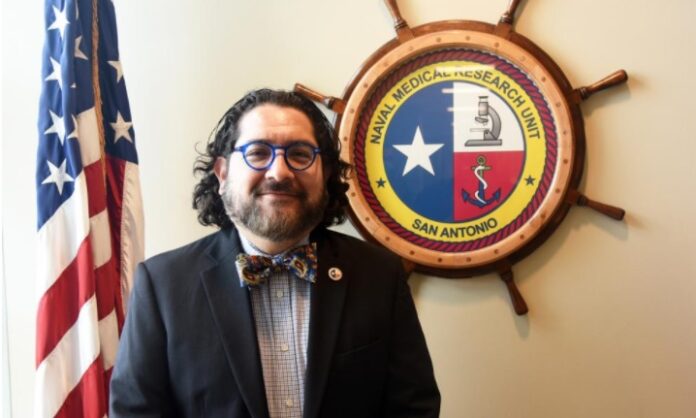 National Hispanic Heritage Month marks a time to showcase and honor the many contributions Hispanic Americans have made to the Department of Defense (DoD) and the nation.

For Naval Medical Research Unit (NAMRU) San Antonio, Dr. Luis Martinez, a research microbiologist, assigned to the Biomaterials Department, Craniofacial Health and Restorative Medicine Directorate, is a representation of the highly professional and diverse civilian workforce within the Department of the Navy.

According to Martinez, who has been a microbiologist for 18 years, the most rewarding part of his job is knowing that the research conducted at NAMRU San Antonio may help combat medics in the field to stabilize casualties.

“I liked the type of research being conducted in the command as well as its mission,” said Martinez, who earned his doctorate from the University of Texas Health Science Center at San Antonio. “The work being done here benefits the members of the military who serve in combat.”

Another reason why he enjoys being with NAMRU-San Antonio is being part of a team.

“Being here has afforded me the opportunity to work in a different field from microbiology and learn from other scientists making me a better-rounded scientist,” said Martinez, the 2015 recipient of the NAMRU-SA Gold Star of Excellence in Scientific Writing, and a Civilian of the Quarter in 2020. “While at NAMRU-SA, I have been involved in numerous research projects, which have been published in high-impact journals.”

During his time with NAMRU San Antonio, Martinez’s ultimate goal is to produce an innovative wound dressing to treat traumatic injuries and burns, thus enhancing the survival of injured warfighters.

“The work being done here has real-world use to benefit the members of the military,” said Martinez. “Working in a team atmosphere, and remembering that we are here to accomplish the mission is highly valued.”

Being a part of the Navy has made Martinez realize that there are other career options for PhD holders that do not involve becoming a professor in academia.

“I was fortunate to have two parents who pushed me to pursue whatever career I chose, and were supportive,” said Martinez. “I was also fortunate to find mentors in my career field who have guided me and advised me.”

NAMRU San Antonio is one of the leading research and development laboratories for the U.S. Navy under the DoD and is one of eight subordinate research commands in the global network of laboratories operating under the Naval Medical Research Center in Silver Spring, Md.