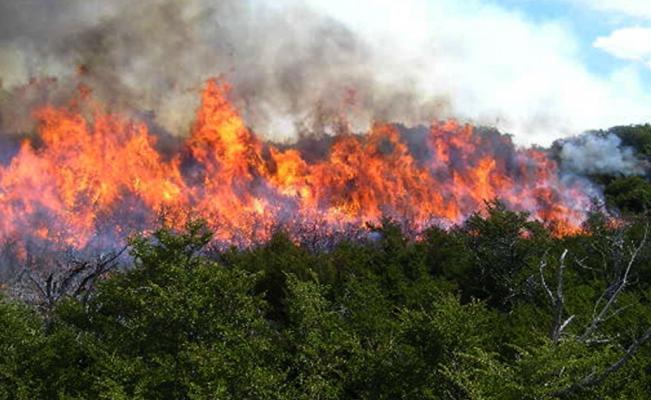 More than 500 hectares of Wirikuta – sacred territory in the cosmogony of the indigenous peoples of the Altiplano and western Mexico – in western San Luis Potosí have been devastated by a forest fire, reported the State Coordination for Civil Protection (CEPC).

Over the weekend, it was reported that the conflagration, which started in the middle of this month, was 80 percent under control, but was reignited yesterday due to winds of up to 70 kilometers per hour.

The CEPC announced that on March 15 it sent 300 brigades to attack the fire on three fronts. However, the gusts of air fanned the flames, informed the priest Gerardo Ortiz, spokesman for the social ministry of Matehuala.

The size of the fire is such, he added, that from his parish, located in the municipal seat of Cedral, “you can see the smoke.” As a preventive measure, residents of Ojo de Agua de Rodríguez were evicted, said community member Temoc Tristán.

According to the social pastoral of Matehuala, community members, ranchers and peasants, the llamas cover part of the Potosí municipalities of Villa de Guadalupe, Charcas and Real de Catorce.

Administrators of the profile assured that “community members and volunteer brigades have been joining to mitigate the fire.” They added that as of Tuesday 517 hectares had been burned “and the fire continues to spread.”

They stated that residents of rancherías had to be evicted and the flames “continue to devastate part of the protected natural area declared on October 7, 2000 as a sacred natural site of Wirikuta and part of the historical-cultural route of the Wixárika people.”

Members of Nación Wirikuta denied that San Luis Potosí authorities had sent 300 brigades, as reported by the CEPC, and stated that those affected “have not received support from the state government to mitigate the fire. The community members and brigade members are exhausted, and they continue to risk their lives with what little they have at hand ”.

Likewise, they asked the population to contribute to the collection center installed on Pedro Vallejo street in the San Miguelito neighborhood, in the capital of San Luis Potosí, “serum, water, fruit, canned food and tools such as picks, shovels, hoes, gloves of bait, vests and buckets ”for those who fight against the flames.

Meanwhile, Civil Protection of Nuevo León explained that winds of up to 60 kilometers per hour make it difficult to extinguish five forest fires in the municipalities of Aramberri, Santiago, Montemorelos, Galeana and General Zaragoza. “The air and ground operations of our combatants will be monitored and priority will be given to the safety of our elements and aircraft,” he said in a statement.

He added that the incident that affects the municipality of Santiago, Nuevo León, and Arteaga, Coahuila, had been controlled to 70 percent, but has ruined more than 2,700 hectares in the first state alone.