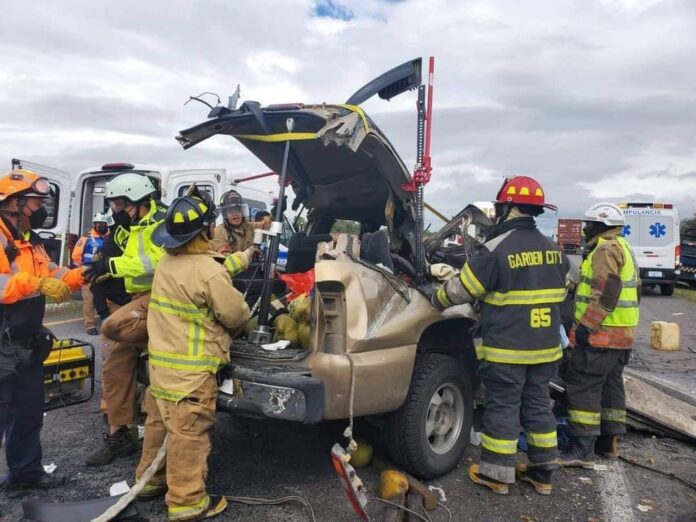 These seven people, originally from the municipality of #Ramos Arizpe, Coahuila, were traveling in a van that was hit by a passenger bus.
According to the authorities report, the accident occurred around 10:00 a.m. at kilometer 94 of federal highway 57 Querétaro-San Luis Potosí.

The first reports indicate that a passenger bus lost control and jumped the ditch to hit a van with Coahuila license plates head-on.

The van was traveling in the direction of Querétaro towards San Luis Potosí.

The passengers of the truck were pressed since their vehicle was destroyed.

Motorists reported the accident to authorities.

Upon the arrival of elements of the Fire Department, Civil Protection, and paramedics from the Red Cross, they confirmed that six of the people involved lost their lives instantly due to the strong impact they received, while two more people, who are minors, were transferred. to receive medical attention, since they presented a serious health condition.

So far, no information has been released about the state of health and legal situation of the bus driver.

The area was cordoned off and closed, so traffic in the Querétaro – San Luis Potosí direction was completely stopped.

The victims were from #Coahuila

San Luis de la Paz Guanajuato Volunteer Firefighters and Paramedics reported that the victims of this tragic accident were from Ramos Arizpe, Coahuila.

For this reason, through the dissemination of the voter card of María Isabel Vázquez Díaz, who has her domicile in Fracc. Parajes de los Pinos in Ramos Arizpe, are requesting the support of citizens to find their relatives, so that they know of the fatal accident they had on the Querétaro-San Luis Potosí highway