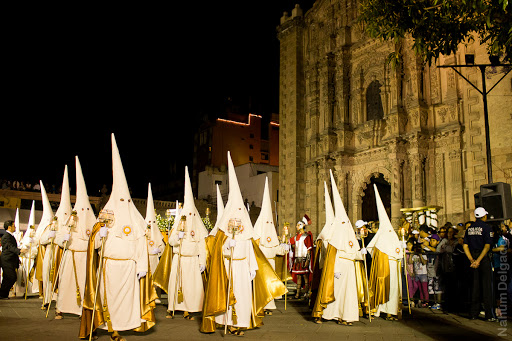 The Procession of Silence has been celebrated in San Luis Potosí every Good Friday since 1954; its origin dates back to the representation of Seville, Spain

This celebration, which is one of the most famous in Mexico, has been held annually every Good Friday  since 1954 and brings together locals, devotees, and tourists during Holy Week.

During the procession, the “Passion and Death of Christ” is represented in a very similar way to that carried out during the Semana Mayor in Seville, Spain, with the difference that in San Luis Potosí, the celebration is characterized by its solemnity and mysticism, as well as being the only one in the world that takes place at night.

The Procession of Silence begins every Good Friday at 8:00 p.m. in the Historic Center of the capital of Potosí. In the midst of the smell of incense, the doors of the Temple of Carmen are opened, from where the group of drums that starts the procession comes out and whose sound accompanies the celebration at all times.

Next, approximately 30 brotherhoods dressed in different colors leave. The hooded men also join, whose attire symbolizes mourning and humility, as well as the costaleros, who carry on their shoulders the image of their brotherhood, under which they carry a sack to support the weight.

In turn, the women wear silk shawls made in the town of Santa María del Río.

During the procession, saetas are heard, which are religious songs, sad and sharp, which come from Spain, and proclamations, which are speeches of reflection on each image represented in the Via Crucis, as pointed out by the tourist portal Visit San Luis Potosí.

During the procession, the Historic Center of San Luis becomes a sacred museum, with images brought from all over the world, which are also adorned with costumes and ornaments according to the occasion.

During the tour, which lasts four hours, the city is submerged in silence as a sign of the Virgin’s mourning and pain. It is estimated that about two thousand people participate in the procession.

So that locals and visitors can witness the celebration, stands are placed along the route and tickets are sold ranging from 50 to 250 pesos.

Finally, the procession concludes in the same place where it began: the Temple of Carmen. The last brotherhood arrives at the meeting point at midnight and the Procession of Silence comes to an end when the doors close again.

What is the origin of the Procession of Silence?

According to the National Institute of Anthropology and History (INAH), the origins of the Procession of Silence go back to the representations of Holy Week in Seville, Spain.

Although these representations were established in the Iberian country during the 16th century, San Luis Potosí welcomed the tradition in the middle of the 20th century in relation to the devotion to the Virgen de la Soledad, which was promoted by the Carmelite Order and the bullfighting community.

Initially, the local bullfighters venerated the Virgen de la Soledad by taking her out of the Temple of Carmen to carry out a small procession. Over time, the celebration was gaining adherents from other churches in the city; Today, there are 30 brotherhoods or penitential brotherhoods that participate in the Procession of Silence.

It was thanks to the efforts of the Tradiciones Potosinas AC association that the Procession of Silence was brought to the streets of the state capital.

The Procession of Silence, cultural heritage of SLP

Due to its cultural and social importance, the Silence Procession was declared Intangible Cultural Heritage of San Luis Potosí in 2013, based on section 34 of the Law for the Protection of Cultural Heritage for the State, as well as the technical opinion issued by the Secretary of Culture.

In the opinion, the Procession of Silence is established as the greatest tourist attraction of Holy Week in the state capital, as well as the most relevant civic-religious event in the city of San Luis.

It is worth mentioning that the Procession of Silence had been carried out uninterrupted from the 50s of the last century until 2020, the year in which it had to be canceled in response to the health emergency caused by the coronavirus, however, the traditional celebration was carried out virtually, a situation that will be repeated in 2021 to prevent the spread of the virus.