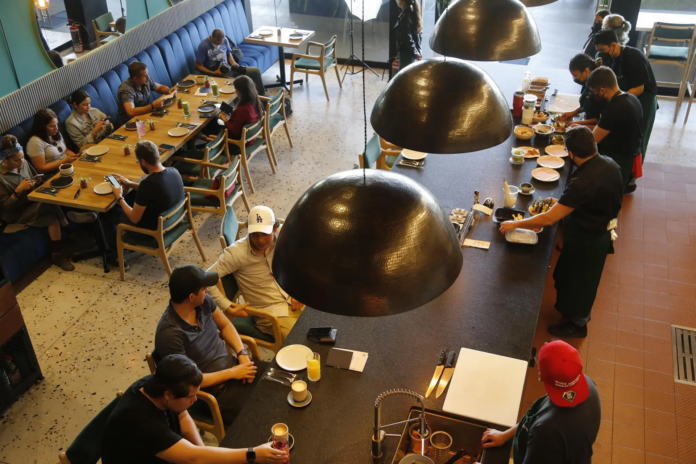 San Luis Potosí.- The chefs of San Luis Potosí, a state in central Mexico, bet on the richness of textures, flavors, and the color of regional Mexican ingredients to mix them with elements of high-end kitchen and turn them into unique dishes for the palate.

Heart of palm, corn, beans, guajillo chili, or vanilla, typical of the Potosi diversity, are some elements that renowned chefs use in their culinary projects that have given new life to the region’s gastronomic sector.

Without following traditional recipes, but following his intuition, Francisco Ibáñez, chef at the “Nawá Culinaria Historica” restaurant, told us this Sunday that in his kitchen they intend to keep the traditional present because of the variety of flavors and textures it brings.

“These are ingredients with which we have a connection because some of us have consumed them since we were children and have been abandoning them,” says the chef, who has worked in restaurants such as Pujol, considered one of the best in Mexico and the world.

Although returning to varieties of corn typical of Mexico, such as blue and yellow, has become a trend in some expensive restaurants, Ibáñez argues that his project goes beyond a fad.

“Suddenly it became fashionable to eat Creole corn, but the joke (point) is that you do it out of conviction. More than a rescue, it is to keep it alive, present”, he emphasizes.

His restaurant has become a reference for haute cuisine in San Luis Potosí, a city in the center of the country with just over 900,000 inhabitants that combines the colonial and the industrial.

“Nawá mixes elements such as beans and hearts of palm from the Huasteca potosina with fish, Mexican meats, and other international food ingredients that result in a risky proposal for diners,” boasts Ibáñez.

Uriel Ortiz is the creator of the “Conxa” bakery, a place that offers high sweet and savory pastries that uses ingredients made in the region such as vanilla and coffee from the Huasteca Potosina or corn from the Río Verde region.

The intention is that these ingredients give a unique and tasty touch to the French or European techniques of haute confectionery, said the chef, who was previously chef at Rosetta, a Haute confectionery bakery and restaurant of chef Elena Reygadas in Ciudad de Mexico.

“It makes a difference compared to industrial products, with real flavors. We take the techniques and bases from other countries and seek to provide different textures and variety with the local product”, he points out.

Paco Hidalgo, a chef originally from San Luis Potosí, has taken the best of the places where he has worked in New York, Mexico City, Mérida, and Guadalajara to create “Malo”, a restaurant that offers fresh and innovative dishes with ingredients produced in various parts of the country.

The chef, who has worked in restaurants such as Alcalde, a haute cuisine proposal in Guadalajara, tells us that the new gastronomic proposals in San Luis want to break with the idea that food should be one way and that people from Dare to try new flavors.

“We want to take people out of their comfort zone so that they dare to try new things,” he says.