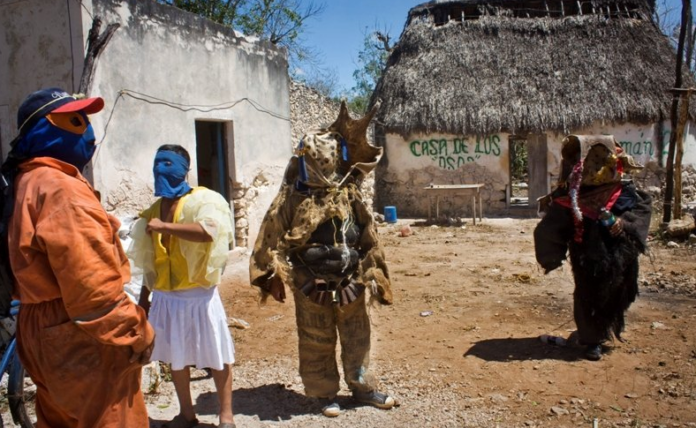 Among the traditions, uses, and customs that surround some communities on the Camino Real in Campeche, there is that of the Osos de Nunkiní, which with more than 100 years old was not overshadowed by the pandemic; They could not meet in the main square of the town because they canceled all the carnival activities, but traditional groups and families took to the streets to dance jarana in exchange for money.

Music was heard in the streets in various parts of the town, they also heard the trumpets and the bass drum playing jarana, they walked everywhere walking and touring the different colonies and traditional neighborhoods such as San Francisco and San Román.

The Osos de Nunkiní have two versions in the history of the town, a tragic one of how the natives had to free themselves from the financial oppression of the mestizos and Spaniards who lived in the area; and another that sounds a bit more comical so that the little ones understand the meaning of a costume that for many is more scary than emotional, they say that during the visit of a circus that brought trained bears as a special attraction, they were not careful with the cages and about five wild specimens escaped from their containers and ran through the streets of the town.

With jute pitas on their faces and bodies, cowbells hanging from their waists, a deerskin on their back and espadrilles, the Nunkiní Bears danced from noon to night, as witnessed by the villagers who preferred only to take out some chairs or their rocking chairs at the doors of their houses, they “shouted” to the leaders of the comparsas and stopped to dance a first jarana, then the one that the public requested.

The show cost between 100 and 200 pesos, in the groups that came out to dance there were bears, bears, masked people, dressed as women, others who just wanted to have fun, and the musicians, in a caravan and the customary adapted motorcycles, walked through the streets, dancing in each house, each door, as if they were starting the carnestolenda day.

Leonel Chan is one of the testimonies of the tradition of dressing as Bear, in his 70s he said that when he was a child his parents began to dress him with his father and grandfather, so he did with his children and continue to do so with their grandchildren, who did not come out this time due to the pandemic.

“Even if it is by giving your ticket to the neighbors, but that the tradition continues, it is more than 100 years that the pandemic could not stop and we must keep these customs firm because it is part of our history and of us, when I was a kid my parents used to disguise me As a bear, I did it with my children and we continue to do it with my grandchildren, ”he said.

He also stressed that before that was the case, not that they met in the town esplanade, but that suddenly one or two bears came running from the entrance of the town to the park, they rested and continued on their way. “Today, although they are not all gathered and went out in groups, those who participated walked the streets,” he added.

The families who asked the bears to stand in their houses came out with the mask properly, but the dancers preferred not to put it on because it suffocated them when dancing and walking.